Following Apple’s reintroduction of the full-size HomePod, how does the new model compare to the divisive original model that the company introduced in 2017 and discontinued in 2021? 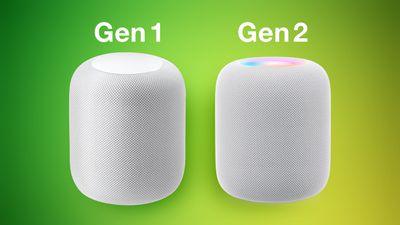 The new ‌HomePod‌ costs $299. The original model debuted at a price point of $349, before dropping to $299 in 2019. After a period of appreciation last year, prices for the original ‌HomePod‌ are now falling on sites like eBay and it may still be possible to pick up a device for a price well under $299.

First-time ‌HomePod‌ customers, those looking to upgrade from the original, or someone looking to add another ‌HomePod‌ to their setup to create a stereo pair may wonder whether it’s worth buying an original model or the new one, so it’s important to weigh up exactly what was added with the reintroduced ‌HomePod‌.

See the detailed breakdown below for every new feature, change and improvement that was added with the new ‌HomePod‌ compared to the original model:

If you already have an original ‌HomePod‌, most users won’t gain much from replacing it with a new model. In fact, in some respects the new ‌HomePod‌ is a step back from the original, with fewer tweeters, microphones, and downgraded support for Wi-Fi 4. The original ‌HomePod‌ still receives software updates with new features and improvements, and the new model is unlikely to it sounds better because of its scaled-down audio hardware, so you might be better off waiting for your current ‌HomePod‌ to reach the end of its useful life before upgrading to a future HomePod model that has more to offer.

A minority of users who specifically want a better handoff experience with the U1 chip, the temperature and humidity sensor for smart home automation, wired support and maybe even the new Midnight color option and tweaked aesthetics may have legitimate reasons to upgrade – but this certainly won’t be the case for most existing ‌HomePod‌ owners.

The new ‌HomePod‌ cannot be stereo-paired with the original model, so if your intention in buying another ‌HomePod‌ is to create one, you will need to track down another original model. If you can afford it, it might be easier to simply replace your original ‌HomePod‌ with a new one and create an entirely new stereo pair with two of the reintroduced models.

If you simply want to add a ‌HomePod‌ to your smart home and audio setup, getting the new model over the original will be much better. The new model offers improved performance, a significantly better handoff experience, a more modern design, is unlikely to sound much different from the original model and should have much better longevity.

Why is Twitter logging me out? And how to fix it

Can you take out a mortgage on a rental property?