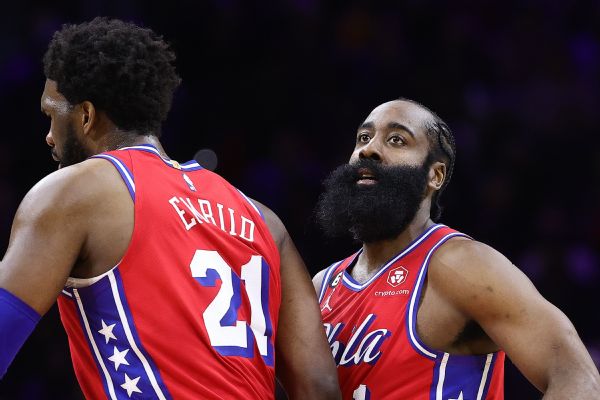 PHILADELPHIA — Joel Embiid scored 44 points, James Harden had a career-high 21 assists in a triple-double and the Philadelphia 76ers overcame a 20-point first-half deficit to beat the LA Clippers 119-114 on Friday night.

“It’s a great company. Mo Cheeks was one of my coaches (in Oklahoma City), and then Wilt, I feel like he holds all the records,” Harden said. “So just to be in the conversation with some of the greatest basketball players to ever touch a basketball is always a blessing.”

Eleven of Harden’s assists went to Embiid, tied for the most by an individual player in any game in his career. Embiid and Harden are the third pair of teammates in the last 25 seasons to have one player go for 40 points and another for 20 assists. They join Paul George and Russell Westbrook in 2018 and DeMarcus Cousins ​​and Rajon Rondo in 2016.

Harden’s performance, approach to the game and the developing chemistry between Embiid and Harden drew praise from coach Doc Rivers.

“This is a generational shooter who has taken and decided to be a point guard, still score, but to be a point guard for this team,” Rivers said. “It’s hard to do. A lot of people, most people, can’t do it, or won’t do it is a better way of saying it. The fact that he’s happy to do it, run the team, organize us is huge for us .”

Describing the 76ers’ comeback, Embiid said, “It’s big time for us. It just shows that we stuck together, we trust each other and we know what we have to do.

“We started the game soft, especially defensively, and as soon as we turned it around, it changed the whole game.”

Rivers called a timeout after Nicolas Batum’s 3-pointer gave the Clippers a 108-107 lead with four minutes left. The 76ers then went on a 10-0 run.

Kawhi Leonard had 28 points on 12-of-19 shooting for Los Angeles. Paul George added 22 points and Norman Powell had 21. The 76ers limited George to five points in the second half, led by an outstanding performance from De’Anthony Melton.

“We knew how good of an offensive team they were,” Harden said. “They caught us in the first half. The second half we picked up our defensive intensity, got out in transition and it made the game a lot easier for us.”

Before the game, Rivers said Tyrese Maxey is nearing his return from a fractured left foot that has kept him out since Nov. 18.

ESPN Stats & Information and The Associated Press contributed to this report.