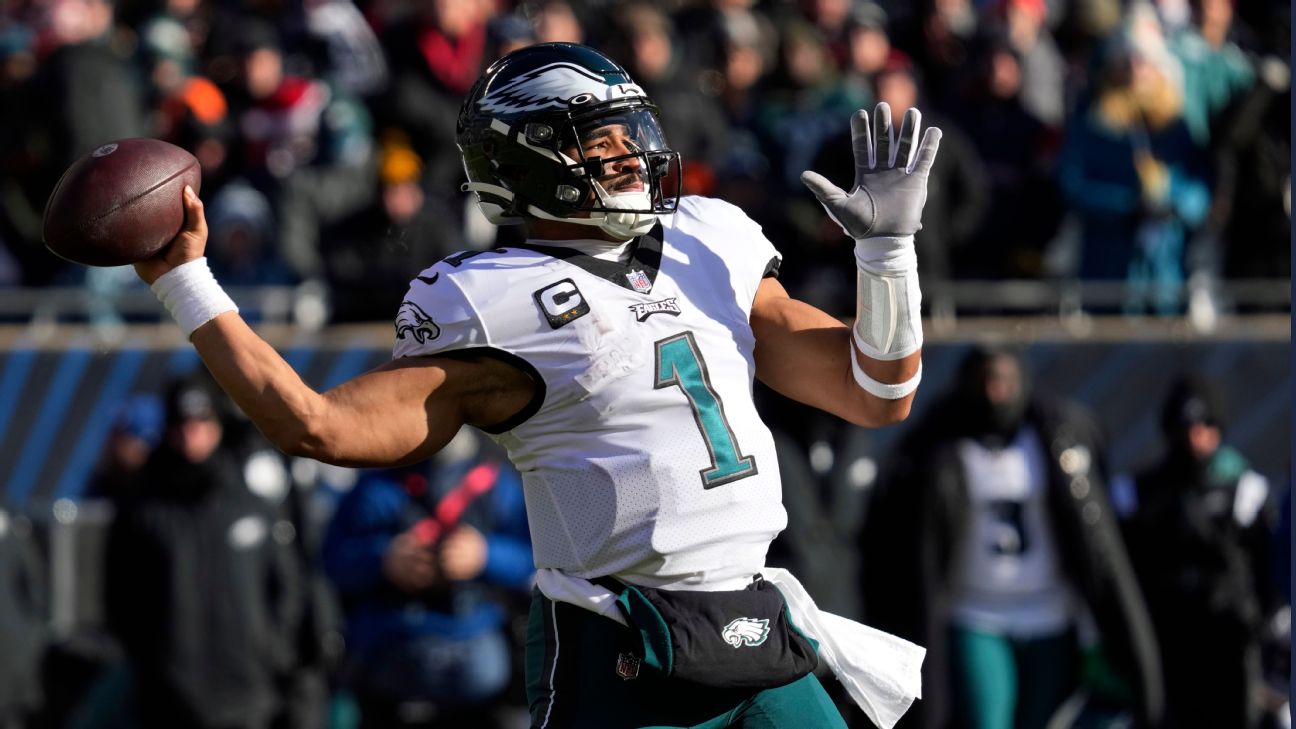 Philadelphia Eagles quarterback Jalen Hurts, who will miss Saturday’s game against the Dallas Cowboys because of a sprained shoulder, is also doubtful to play against the New Orleans Saints in Week 17, league sources told ESPN.

Hurts is recovering from what doctors are calling an SC sprain in his throwing shoulder — an injury to the joint where the collarbone meets the sternum. The Eagles would like to see how this weekend plays out in the NFC playoffs and how Hurt’s shoulder responds to rest and treatment before deciding whether the MVP candidate can play against the Saints on New Year’s Day.

The Eagles (13-1) need to win one of their remaining three games — they finish the schedule with home games against the Saints and Giants — to clinch the NFC’s top seed and home-field advantage in the playoffs.

If the Eagles can win Saturday in Dallas, they wouldn’t have to risk Hurts next week against the Saints. But if they lose Saturday, Hurts will push to play against New Orleans even if he’s not fully healthy, which is expected to be the case, according to sources.

Gardner Minshew will replace Hurts as the Eagles’ starting quarterback on Saturday against the rival Cowboys. Minshew is in the final year of his contract and is scheduled to be a free agent after this season.

Minshew has performed well in the spot for the Eagles in the past, going 20-of-25 and throwing a pair of touchdowns for an injured Hurts last December against the Jets.

The Eagles know how tough Hurts is and believe he will exceed any expected recovery times provided by their doctors. Hurts suffered the injury in the third quarter of last Sunday’s win over the Chicago Bears and still ended the game. He didn’t want to tell anyone he was injured, according to sources.

Eagles coach Nick Sirianni said last week that the organization would take it day by day regarding Hurt’s availability against the Saints, stressing that Hurts “did everything he could” to get physically ready to play in Saturday’s NFC East showdown.

“He was trying like crazy,” Sirianni said. “And I know he still wants to go. Jalen Hurts is the toughest player I’ve ever been around.”

Hurts, 24, has had a breakout season in 2022, accounting for 35 total touchdowns (22 passing, 13 rushing) to tie Randall Cunningham’s franchise record while passing for 3,472 yards and rushing for 747 yards in 14 games. He has only had five passes intercepted and is completing 67.3% of his attempts.

DVOA: Year of the Big Seven