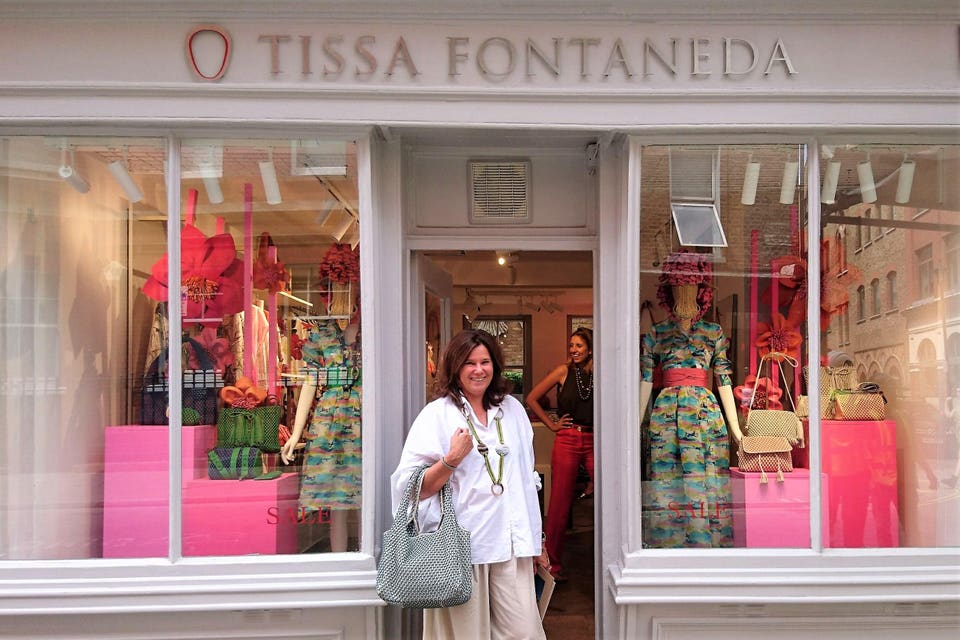 The premium and luxury fashion sectors are increasingly dominated by multinational conglomerates with huge marketing budgets such as Moët Hennessy Louis Vuitton (LVMH) and Gucci owner Kering Group, which remains mired in controversy over ill-judged messages from Balenciaga. But many discerning consumers shift loyalty to independent fashion brands that stand out from the crowd.

With roots in haute couture and a strong signature identity in the form of the leather ‘bubble bag’, Tissa Fontaneda has found a USP to exploit that has attracted some big, and somewhat sophisticated, names. They include royals such as the queens of Spain and Jordan, Letizia Ortiz Rocasolano and Rania al Abdullah respectively, plus Australian actress Cate Blanchett.

The handbag and accessories brand was founded by Munich-born Tissa Fontaneda in 2010, after honing her skills at Daniel Swarovski in Paris as a design assistant to Rosemarie Le Gallais and Hervé Leger, followed by a long stint at Spanish luxury brand Loewe (wholly owned by LVMH) since 1996) in the mid-nineties. In Madrid, she developed Thierry Mugler’s handbag collections (via Loewe’s production) and later became product manager for the brand.

“These were the creative times before the big groups took over the fashion industry and turned luxury into big business,” Fontaneda told Forbes.com.

Despite working with some big fashion names, the designer decided to go it alone more than a decade ago. Opening its flagship store in the heart of London’s trendy Marylebone just before Covid-19 hit was another leap in the dark – but it seems to have paid off in 2022.

I recently caught up with Fontaneda across the cobbled lane from her London store to find out how the brand has survived the harsh pressures of the fashion industry, not to mention the Covid downturn, and maintained its market position.

The fashion industry has changed since your days in Paris and Madrid in the nineties… how?

In luxury, the handbag industry was so different. The designers had their own personalities… it wasn’t the same. Whether it was Saint Laurent or Lacroix, they all had their individual approaches. We also had craftsmen in Spain with skills that you could not begin to imagine. It wasn’t focused on business and making money the way it is today.

So do you feel that creativity has taken a knock?

Yes. It has become centralized without regard to the core values ​​of the brands. Today there is a uniform appearance; it is because the personality of the brands is disappearing. This is a sad development for me to see as a designer. Normally when producing a handbag collection you start with an idea, followed by the prototype and then production. Now the process is adapted to what the production can do.

However, production efficiency drives huge profits for these companies; Bernard Arnault (LVMH’s CEO) has just become the world’s richest man again. Isn’t it just a sign of the times?

In fact, the production setup today means you can make thousands of luxury bags with a much larger margin than before. It’s great that they can make so much money, but this is a business model, not a creative one. And that’s not what I want to do.

What is your vision for luxury handbags?

Let me give you an example. An American woman walked into the store the other day and she said that she found it frustrating when she traveled around Europe that all the luxury stores looked the same. She was delighted to discover mine because it is so different. We find this a lot; people want something that stands out, and that stands out for something.

But being independent is always financially risky in fashion. Is it worth it?

I started this whole business with €50,000 and our growth has been completely organic, with some investment from friends and family. We can’t spend a lot on advertising, which these days can also drive editorial, so it hasn’t been easy to get our name out there.

Still, we’ve got quite a spread and we expect to end the year with 25% growth. Our largest distribution markets are Germany, Great Britain, Switzerland and Austria; with some points of sale in North America; and we are now looking at expanding in South America. I would like to create a new company that owns our distribution where I don’t necessarily have the majority so I can focus on store development.

A series of stores is the way forward, then?

A brand like mine needs its own stores, it’s vital. We are a label that needs to be presented and explained. We are not a department store brand because although our price level is high, we do not fit in with the designer brands, while the niche fashion brands tend to be positioned at a different level. We do well in multi-brand fashion retailers, for example in exclusive ski resorts and luxury hotel shops where there are many tourists. This is something we focus on.

Do you have specific locations in mind for new stores?

There are several places on my wish list of course. An example is Madrid, where we have a showroom, and which is becoming a hot city, especially after the pandemic, thanks to the way the municipality treated small businesses during that time. Many investors have been attracted to the capital, which is seen as dynamic, and several luxury hotels have opened, such as the Rosewood and the Four Seasons where we now have a presence. The city is a hub for South Americans interested in shopping.

Why did you choose London as your first flagship store?

Firstly, I love London; it is a melting pot of so many things – the whole world meets here. But London is also free from the constraints you might find in Paris or Milan where they have strong fashion traditions. I feel London is much more open to niche brands, plus we already had some wholesale distribution here. When I was about to take the plunge, Brexit came along and it felt like a big risk so I ended up opening through a retail partner in Marylebone, unfortunately just as the pandemic hit. Nevertheless, we remain and the store is a success.

And can bags alone sustain revenue in this trendy part of town?

This year we added ready-to-wear to develop a lifestyle look, but we’re not a clothing brand so we find our way. In the meantime, we’ve brought in other independent brands that we like and that match Tissa Fontaneda see. We are creating our own mini concept store at a time when multi-brand fashion stores are disappearing.

Being independent gives you that freedom, but with so many concept stores in decline, is this the right strategy?

Today you can dress amazingly at Zara, but it’s the accessories like handbags that make the difference. Not everyone wants to look like a footballer’s wife. For the discerning, it’s not about the logo, it’s about the beauty of the line. I am determined. The Tissa brand has power… it works, as the Marylebone store shows. Collaborations with other designers would also be mutually beneficial as long as we are on the same wavelength. We sell to women who are independent thinkers and not slaves to typical luxury brands.

3 people share how they kept their New Year’s resolutions

Kevin McCarthy may need a doctor or a psychiatrist